The World’s Next Ocean

Is being “woke” a way to gain status?

This new piece at the increasingly important site Quillette by two academics with the same name (brother? father and son?), is well worth reading. It’s amusing even if not 100% accurate, but it’s accurate enough to strike home, and to make you rethink what Authoritarian Leftism is all about:

The Winegards’ thesis is not entirely new. The Regressive Left, they say, is in effect a religion with a sacred narrative (victimized groups), a moral doctrine (i.e., the power hierarchy in America needs to be reversed) and a priestly caste, which, they say, comprises white intellectuals who promulgate Purity Doctrine as a way of separating themselves from the “hoi polloi” and gaining status. Since status is a zero-sum game—the more others get, the less you have—the “woke” priests spend their time signaling their purity, denigrating others who make missteps, and never engaging in actually effecting change.

We all know people who…

There’s a small road just north of Moss Landing, California that runs beside a small estuary that’s terrifically rich in wildlife: birds, otters, sea lions, and so on. It’s been called “The Serengeti of the Pacific”, and we spent quite a bit of time there. Here are some photographs of what you can see.

A long-billed curlew (Numenius americanus), which makes its living by probing sand and mud for crabs and other invertebrates.

A long-billed curlew foraging on the beach:

Three sanderlings (Calidris alba). As ecologist Bruce Lyon wrote me, “These are arctic (tundra) breeders and they have an interesting mating system if I recall correctly. The breed as pairs but the female lays two clutches, one that she incubates and one that her mate incubates.” 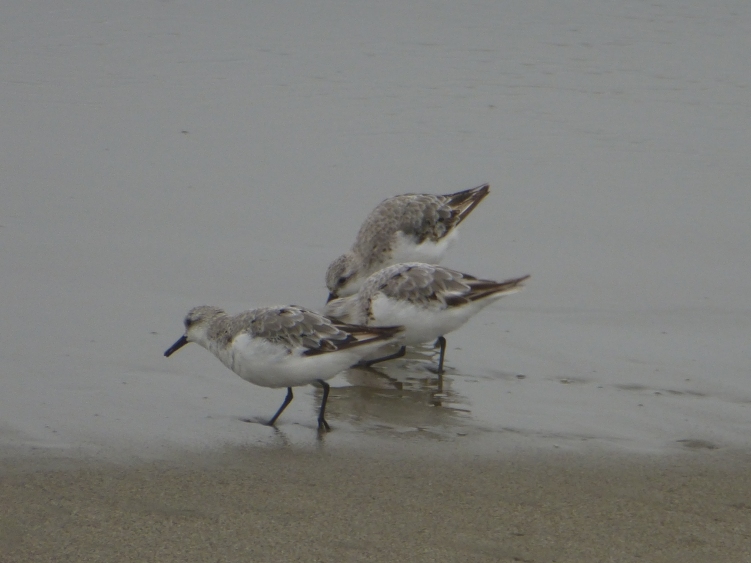 Here’s a sanderling foraging on the beach. It’s hard to take photos and videos of these birds…

Best Argument Ever Against Political Correctness by Stephen Fry

After years of following leads and contacting travel/expedition companies, it looks as if I’ll be lecturing next year on some cruises to Antarctica and the Falkland Islands, which has always been a great dream of mine. It will be great fun lecturing on cruises again (I’ve done it four times), as the audiences are always much more receptive and interested than are the students in a regular college course. And I can’t wait to see the scenery and, especially, the wildlife. And maybe a blue iceberg!

Until I read this article from MyModernMet, and followed the links, I had no idea that icebergs could actually be blue. (They can also be green.) After all, they’re made of water, and water is clear and ice cubes are clear. But this doesn’t appear to be the case with ‘bergs. As the “Met” link reports:

While on an expedition in Antarctica, interface designer…

Before Earth Day (1970) and wetland protection laws, the Red-shouldered Hawk (Buteo lineatus) was being extripated from most of Northeastern North America. As various endangered and threatened state laws came into place, this species was added as Threatened. Nesting in wetland forests brought about those listings. In Massachusetts, many of the first strip and enclosed malls were built after destroying Atlantic Whitecedar Swamps along the Route 128 corridor: prime real estate for the Red-shouldered Hawk. This species has recovered in the Northeast — US and Canada — but not to pre-WWII populations.

First we have a hawk in hand at Braddock Bay, north of Rochester NY. This is from my…

I’ve watched with approbation as Andrew Sullivan, with whom I’ve often disagreed, seems to have mellowed, becoming at least a centrist instead of a conservative, and remaining mum about his mystifying Catholicism.  Sullivan’s nice new column in New York Magazine, on tribalism, starts with Jon Haidt and Greg Lukianoff’s new book, The Coddling of the American Mind, and then goes into the bitter and acerbic polarization of the American electorate, as exemplified by the fracas around Brett Kavanaugh’s nomination (I still am unable to automatically equate accusations with fact) and the firing of the New York Review of Books editor Ian Buruma simply because he published a piece by an accused sexual assailant (Jian Ghomeshi) who was acquitted. Sometimes I feel the world has gone mad, and I no longer know where I fit in. I can’t align with the extreme Left, whose actions often seem fascistic…

My letter to the University of Michigan: why a professor can’t refuse to recommend students on the grounds of political disagreement

As I reported earlier today, John Cheney-Lippold, an associate professor of American Cultural Studies at the University of Michigan refused to write a letter of recommendation for an undergraduate to study in Israel—after first agreeing to do so and then finding out it was Israel. Cheney-Lippold subscribes to the anti-Israel Boycott, Sanctions, Divestment movement (BDS) and thus considered withdrawing his offer to write as a demonstration of his personal ideology. In contrast, I considered this a dereliction of duty, not a demonstration of academic freedom. It hurts a student’s career, wishes, and prospects in order to supposedly preserve one’s ideological purity. It is one’s JOB as a faculty member to write letters for students.

I would write for any student that I felt I could support on academic grounds, regardless of where they wanted to study. I would, for example, gladly write a letter for a student to study…