(An edited version of this article was published in the Sandringham
& District Historical Society Newsletter, February 2019)

Point Avenue is named after ‘The Point’, which was a Victorian-style mansion overlooking Ricketts Point in Beaumaris.  It was built in 1890 by wealthy wine and spirits merchant Matthew Lang (1830 – 1893), after whom Lang Street is named. Lang was Lord Mayor of Melbourne from 1889 until he was elected to the Legislative Council in November 1892.  He died at The Point in March 1893. The boundaries of Lang’s original estate are thought to be roughly Beach Road, Reserve Road, Haydens Road and what is now Florida Avenue.  The western end of Point Avenue was the front driveway to the estate, and the first leg of the eastern end of Point Avenue was the rear access driveway leading to the coach house.

In 1919, The Point was purchased by Thomas Turner Shaw, who later left it to his son, the pioneer aviator Major Harry Turner Shaw (1889-1973), whom I personally knew.  (Major Shaw is an historic figure worthy of an article of his own).  The Shaws gradually subdivided and sold the estate, creating Point Avenue, Lang Street and surrounding streets.  They finally sold the mansion in 1959, after which they lived at what is now ‘Pointside’ in Lang Street, but which was originally the servants’ quarters, coach house and horse stables. 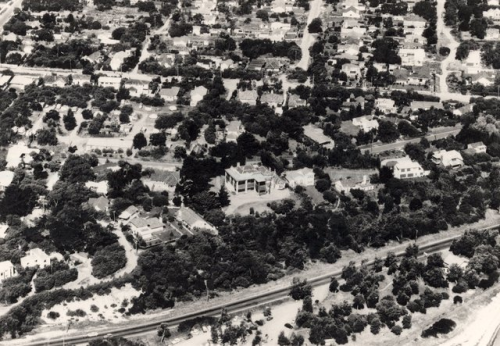 The Point mansion (centre) in 1959, just before it was demolished. The curved street in the left of the picture is Point Avenue. Beach Road is in the foreground.

I grew up at No. 6 Point Avenue which was on the corner of Lang Street. My parents purchased the land from the Shaws in 1948 for 182 pounds and ten shillings.  They later did a further subdivisional deal with neighbours to create 80 feet frontages to the south side of Point Avenue, instead of the usual 60 feet.

What is now the eastern end of Point Avenue was a caravan park, with an English-style ‘village green’ in the centre.  This was possibly attractive to the ‘ten-pound poms’ who lived there.  As a result, I grew up with the mistaken impression that British people were all poor with funny accents and missing teeth.

Residents of the western end of Point Avenue were attracted to its natural bush environment; and they later successfully campaigned to stop the Sandringham Council from making the street with the usual footpaths and guttering.  As a result, Point Avenue remained an unmade private road with the residents themselves responsible for filling in potholes and any other maintenance.

One of the leaders of this campaign was the late Colin Macrae, who lived with his wife Joan at No. 2 Point Avenue, and who became the second President of the Beaumaris Tree Preservation Society (now the Beaumaris Conservation Society).  The important fossils at the Beaumaris Bay Fossil Site were a major interest of Colin’s. Fossils he found are now in the collections of Museum Victoria and the Sandringham & District Historical Society.  His discovery of fossil remains of a significant extinct penguin at this site led to it being reported in a 1970 paper by a Harvard University palaeontologist, with the species being named after Colin as Pseudaptenodytes macrei.

Colin Macrae’s wife Joan (nee McIntosh) was a potter, who gave pottery classes to the ladies of Beaumaris (including my mother).  The members’ exhibition gallery of the Beaumaris Art Group in Reserve Road is now named after Joan Macrae.

On the beach side of the Macrae’s at 401 Beach Road lived Richard Franklin, who started his artistic career as a drummer with the Pink Finks rock band (which later became Daddy Cool after a couple of personnel changes).  Richard became a Hollywood film director and a protégé of Alfred Hitchcock.  He directed Psycho II (1983) and later returned to Australia where he filmed Hotel Sorrento (1995) and Brilliant Lies (1996).

The Shaws’ daughter Raithlyn married Creighton Burns, who was Reader in Politics at the University of Melbourne and who later became the Editor of The Age newspaper.  They lived at No. 1 Point Avenue, which was the old gatehouse to The Point mansion. I remember seeing Creighton on ABC TV’s Meet The Press interviewing Prime Ministers and other politicians. He later became Chancellor of the Victoria University of Technology.

Next to the Burns at No. 3 Point Avenue lived the MacGregors, who also had a back gate to Coral Avenue.  The father Bruce was responsible for bringing Tupperware to Australia.  The mother Nan later owned a dress boutique in Black Rock.  The daughter Sue is now a prominent barrister and solicitor in St. Kilda doing mainly legal aid work.

At No. 9 Point Avenue lived the Bunnetts.  The father Lindsay was an architect, who designed some of the famous Beaumaris Modern houses in the 1960s.  The mother was Kay Bunnett who was an artist specialising in Ikebana, including wall hangings.  Sadly, the Bunnetts got into a very bad argument one night, where Kay grabbed an antique dagger off the wall and stabbed Lindsay to death with it.  Kay pleaded guilty to manslaughter, but was not sent to prison because of her age and ill-health.

Across the road from the Bunnetts were the Gashlers at No. 4 Point Avenue.  The father Chick was a legendary amateur snapper fisherman in Port Phillip Bay; and the mother June was a champion amateur golfer.  One of the daughters was named Suzy. I remember at about age 10 Suzy telling me that her mother wanted her to become a model, which naively I scoffed at.  But sure enough, Suzy Cato-Gashler did become a top model and later a notable TV, film and voice-over actress.  She recently appeared in The Dr. Blake Mysteries: Family Portrait (2017).

In the late 1950s, the caravan park at the eastern end of Point Avenue was subdivided into the house blocks you see today.  No. 21 Point Avenue was one of the Beaumaris Modern homes listed in the recently published book of the same name.  It was designed by architect Bill Kerr (whom I later knew as a jazz clarinet player) for the Deutscher family.  The father was Ray who inherited the WA Deutscher fastener manufacturing business.  The son was Chris Deutscher, who became the art dealer of Deutscher-Hackett fame.  Chris and I went to Haileybury together (as did Richard Franklin). I also played in Chris’ jazz band but we were never close friends.