A vegan claims that eating tofu is cultural appropriation

I’ve written a fair bit about accusations of cultural appropriation, and I do so for several reasons. First, these accusations are almost always totally misguided, mistaking admiring imitation for bigotry and theft. Second, they clearly show the folly of the Authoritarian Left, both its virtue-flaunting and its adoption of “actions” that are completely useless in changing society. Really, how much “inclusiveness” is promoted by picketing a show of kimonos at Boston’s Museum of Fine Arts? Or the demonizing of white women who wear hoop earrings?

Finally, the claims often blend Wokeness with unintended humor, showing that many claims of cultural appropriation are almost indistinguishable from satire. The claim at hand is one of these near-satirical arguments, but I’m pretty sure it’s real. Or at least Yahoo UK thinks so (click on screenshot): 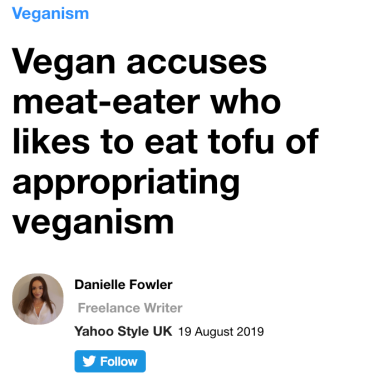 According to the article, this exchange appeared on a reddit site:

There we have it, ladies, gentlemen…