Buridan’s Ass is the name give to an apparent paradox related to the free will paradox; although there is some debate amongst philosophers as to whether it actually is a paradox (see below).

The paradox is named after the French priest and philosopher Jean Buridan (c.1300-1358CE), who studied under William of Ockham.  It refers to a hypothetical situation where a donkey finds itself exactly halfway between two equally big and delicious bales of hay.  There is no way of distinguishing between these two bales – they appear to be identical.  Because the donkey lacks a reason or cause to choose one over the other, it cannot decide which one to eat, and so starves to death. This tale is usually taken as demonstrating that there is no free will. 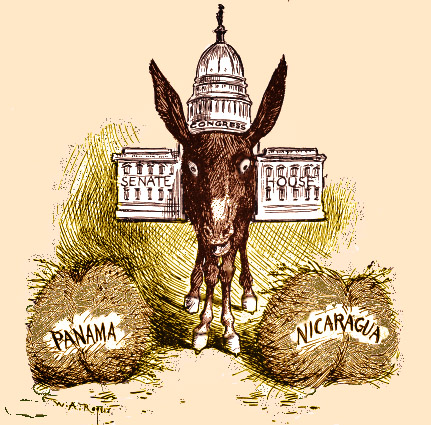 The paradox actually predates Buridan – it dates to antiquity, being found in Aristotle’s On the Heavens.[2] Aristotle, in ridiculing the Sophist idea that the Earth is stationary simply because it is circular and any forces on it must be equal in all directions, says that is as ridiculous as saying that:

…a man, being just as hungry as thirsty, and placed in between food and drink, must necessarily remain where he is and starve to death.  — Aristotle, On the Heavens, (c.350 BCE)

The 12th century Persian Islamic scholar and philosopher Al-Ghazali discusses the application of this paradox to human decision-making, asking whether it is possible to make a choice between equally good courses without grounds for preference.  He takes the attitude that free will can break the stalemate.

Suppose two similar dates in front of a man, who has a strong desire for them but who is unable to take them both. Surely he will take one of them, through a quality in him, the nature of which is to differentiate between two similar things. — Abu Hamid al-Ghazali, The Incoherence of the Philosophers (c.1100CE)

If we could find a donkey which was dumb enough to starve between two piles of hay, we would have evidence against free will, at least as far as donkeys are concerned (or at least that particular donkey). But that’s not very likely. No matter how artfully we arrange the situation, a donkey will not hesitate very long, if at all, and will soon choose one of the piles of hay. He doesn’t care which, and he certainly won’t starve. However, even if we conducted thousands of experiments like this, and no donkey ever starved, we would still not have proved the existence of free will, because the reason no donkey ever starves in front of two equally attractive piles of hay may simply be that those piles aren’t really equally attractive. Perhaps in real life there aren’t any situations where the weighted reasons for a choice are equal.[1]

So Hauskeller’s suggested solution to the paradox is that the piles of hay are not equal in practice – the donkey detects a slight difference which causes it to choose one pile over the other. This solution is not very convincing when one considers the hypothetical possibility of the two piles of hay being exactly equal in appearance. So it seems that we still have a problem here.

Some proponents of hard determinism have acknowledged the difficulty the scenario creates for determinism, but have denied that it illustrates a true paradox, since a deterministic donkey could recognize that both choices are equally good and arbitrarily (randomly) pick one instead of starving. For example, there are deterministic machines that can generate random numbers, although there is some dispute as to whether such numbers are truly random.