‘Risk’ may be defined as the probability of something bad happening multiplied by the resulting cost/benefit if it does happen.  Risk analysis is the process of discovering what risks are associated with a particular hazard, including the mechanisms that cause the hazard, then estimating the probability that the hazard will occur and its consequences.

Risk assessment is the determination of the acceptability of risk in two dimensions – the likelihood of an adverse event occurring; and the severity of the consequences if it does occur,[1] as illustrated in the diagram below. 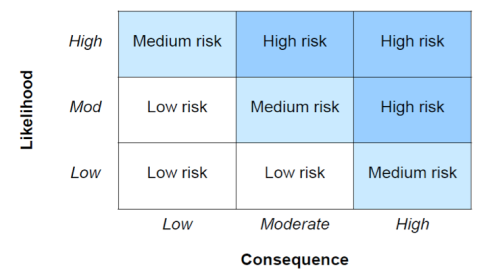 In assessing the consequences, consideration needs to be given to the size of the population likely to be affected, and the severity of the impact on those affected.  This will provide an indication of the aggregate effect of an adverse event. For example, ‘major’ consequences might include significant harm to a small group of affected individuals, or moderate harm to a large number of individuals.[2]

A fallacy is committed when a person focuses on risks in isolation from benefits, or takes into account one dimension of risk assessment without the other dimension.  To give a practical example, the new desalination plant to augment Melbourne’s water supply has been called a ‘white elephant’ by some people, because it has not been needed since the last drought broke. But this criticism ignores the catastrophic consequences that could have occurred had the drought not broken. In June 2009, Melbourne’s water storages fell to 25.5% of capacity, the lowest level since the huge Thomson Dam began filling in 1984. This downward trend could have continued at that time, and could well be repeated during the next drought.

No responsible government could afford to ‘take the risk’ of a major city of 4 million people running out of water.  People in temperate climates can survive without electricity or gas, but are likely to die of thirst in less than a week without water, not to mention the hygiene crisis that would occur without washing or toilet flushing.  The failure to safeguard the water supply of a major city is one of the most serious derelictions of government responsibility imaginable.

A similar example of fallacious reasoning is in the area of climate change, where the public debate wrongly focusses on whether the science is true or false, rather than on the risks and consequences of it being true or false. This video explains the fallacy quite well.

Other examples of this fallacy are committed by the anti-vaccination and anti-fluoridation movements, often accompanied by conspiracy theories.  They both focus on the very tiny likelihood of adverse side effects without considering the major benefits to public health from the vaccination of children and the fluoridation public water supplies.  Hardly anybody has ever died or become seriously ill in Australia from the side effects of vaccination or fluoridation [3]; yet large numbers of people have died from the lack of vaccination.[4] The allegation of a link between vaccination and autism has been discredited, retracted and found to be fraudulent.  The benefits of fluoridation are well documented. The risks of general anaesthesia for multiple tooth extractions are not to be idly contemplated for children, and far outweigh the virtually nonexistent risk from fluoridation.[5]

[1] This is based on the Australian/New Zealand Standard for Risk Management.

[3] In 2010, increased rates of high fever and febrile convulsions were reported in children under 5 years of age after they were vaccinated with the bioCSL Fluvax® vaccine. bioCSL Fluvax® has not been registered for use in this age group since late 2010 and therefore should not be given to children under 5 years of age. The available data indicate that there is a very low risk of fever, which is usually mild and transient, following vaccination with the other vaccine brands: Agrippal®; Fluarix®; Influvac®; and Vaxigrip®.  Any of these vaccines can be used in children aged 6 months and older. This and further information on flu vaccination is available here.

[4] The former Commonwealth Chief Medical Officer, Prof. Jim Bishop has argued that the flu vaccination program “changed dramatically the flu outlook for this country”, with admissions to intensive care from swine flu falling from 681 in 2009 to just 60 in 2010, and hospitalisations dropping from nearly 5000 to 600. Swine flu killed 191 Australians in 2009 and 36 in 2010. In contrast, seasonal flu killed 1796 Australians that year – but, unlike swine flu, the victims were mainly the frail and elderly. Prof. Bishop cautioned that one in every three hospital patients were “perfectly fit and well” before they caught swine flu, which was severe in pregnant women, teenagers who had lost their innate childhood immunity and indigenous people who tend to suffer underlying health problems. Three pregnant women died of swine flu, and 280 ended up in intensive care.