(An edited version of this essay was published in The Skeptic magazine, March 2014, Vol 34 No 1. The essay is based on a talk presented to the Mordi Skeptics in February 2014).

Some people claim that swimming with dolphins is a mystical or spiritual experience. Irrational beliefs range from dolphins being super-intelligent, to having ESP, to possessing special healing powers and even being aliens from a planet in the Sirius solar system! On the other hand, getting up close and personal with dolphins can be risky for both species – especially for the dolphins.  These risks are greatest where dolphin populations are vulnerable to extinction, such as in Port Phillip Bay, Victoria.

The current mysticism associated with dolphins may well date from ancient mythology, where dolphins were often depicted as helpers of humans.  Ancient seals, coins and items of pottery often show a man or boy riding a dolphin. One of the earliest known images is at the ruined Palace of Knossos in Crete; where there is an attractive fresco of some blue dolphins swimming with fish (c.1600BCE).  Unfortunately, the Minoan script known as Linear A has not yet been deciphered; so the back story of these dolphin frescos remains as mysterious as the ones of acrobats leaping over bulls elsewhere in the palace.  One possibility is a connection with the god Dionysus, of which archaeological traces have been found amongst the Minoan ruins. 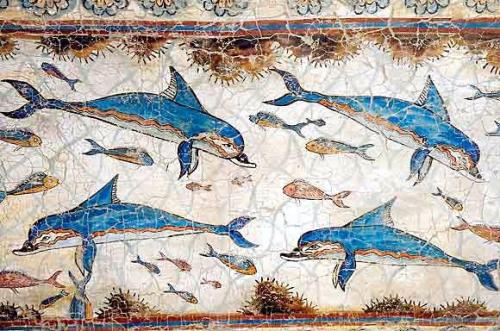 Fresco of blue dolphins at the ruined Palace of Knossos in Crete (c.1600BCE)

In classical Greek mythology, Dionysus (known as Bacchus by the Romans) was the god whose spiritual portfolio included the grape harvest, winemaking and wine, ritual madness and ecstasy.  He may have been worshipped as early as c. 1500–1100 BCE by the Mycenean Greeks. According to legend, Dionysus was once captured by Etruscan pirates who mistook him for a wealthy prince they could ransom.  After the ship set sail Dionysus invoked his divine powers, causing vines to overgrow the ship where the mast and sails had been.  He turned the oars into serpents, so terrifying the sailors that they jumped overboard, but Dionysus took pity on them and transformed them into dolphins so that they would spend their lives providing help for those in need. 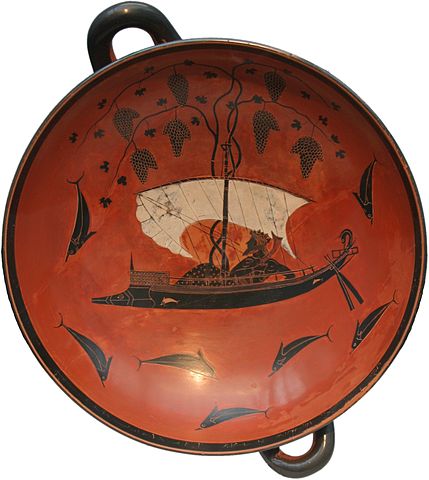 Dolphins were also the messengers of Poseidon, the Greek god of the sea, and sometimes did errands for him as well. Dolphins were sacred to the other gods Aphrodite and Apollo. In Hindu mythology, the Ganges River Dolphin is associated with Ganga, the deity of the Ganges river. The dolphin is said to be among the creatures which heralded the goddess’ descent from the heavens and her mount, the Makara, is sometimes depicted as a dolphin. The Boto dolphins in the Amazon River are believed to be shapeshifters, or encantados, who are capable of having children with human women.

Today, there exists a range of mystical beliefs about dolphins, some of which may be a legacy of the ancient mythology. These beliefs range from seemingly innocuous brand names (such as the Dolphin Health & Wellness Centre at Cessnock, 50km from the NSW coast), to various manifestations of New Age nonsense, to some quite bizarre mystical and spiritual claims about dolphins. I hesitate to use the term ‘pseudoscience’ because these claims rarely even pretend to be scientific. I have not found a single New Age or mystical web site that provides any empirical evidence in support of their often outlandish claims about dolphins.  And as the late Christopher Hitchens once said: “That which is asserted without evidence can be dismissed without evidence”.

A common theme seems to be a claim that dolphins have miraculous healing powers, and that swimming with dolphins or ‘channeling their energies’; through a fee-charging spiritual healer will heal the soul if not the body. A typical marketing blurb reads:

‘We bring the gifts of the dolphins … from sea to land! By spreading Dolphin Love, Joy, healing, and higher consciousness in the world, we are co-creating, with Dolphin, Whale, and other spiritual sources, Unity-Community on land among humanity. This is the New Earth’.

Other claimed services include ‘Dolphin Healing Touch’, ‘Chakra Clearing’, ‘Channelling Ancient Atlantean Energy’, ‘Creating Flow’ (whatever that means) and ‘Photon Light Therapy’ (is there any other type of light?). One specific healing claim that can be tested is the following:

‘During the healing process the dolphins’ wounds don’t show signs of infection. Researchers have discovered that their skin and blubber contain compounds with antibacterial properties, which may help stop infections in the open wounds’.

This claim is demonstrably false. For instance, dolphins are susceptible to the fungal skin infection Lobomycosis, as shown in the following photograph. 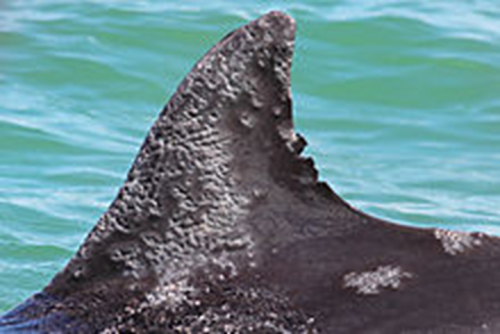 At least one dolphin therapist offers ‘healing at a distance’ not only at a distance from dolphins, but long distances away from the therapist! ‘Anne’ is an attuned channel to transmit dolphin energy to her clients. For a distance session you make a quick phone call to Anne and she will give you some simple instructions and help you set an intention for the session as well as help you to open to the frequency of the dolphins. Then you hang up and sit or lie down to receive. You can even fall asleep during the session! Sessions generally last about 40 minutes. After you feel complete, you phone Anne again and she will discuss how the session went for you and share with you her unique gift of receiving visions and messages from the dolphins and many other creatures from both the sea and land.

One of the most bizarre claims about dolphins is that they are aliens from a planet in from the Sirius solar system.

‘The Pleadians decided to bring some of the dolphins with them when they knew their home world was going to be extinct and they found Earth. When I work with Dolphins I find I have an emotional and uplifting experience, similar to the Unicorns, but in a different vibration. Dolphin healing uses sound as well as the usual light vibration we use in Reiki and other forms of healing’.

Had enough? I think you probably have the general drift of this nonsense by now.

At the risk of disappointing followers of the Pleiadians, dolphins evolved right here on planet Earth. They are marine mammals of the taxonomic order Cetacea, which includes whales and porpoises. Cetaceans evolved from land mammals and share a common ancestor with even-toed ungulates, such as the hippopotamus and deer. Unlike fish, cetacean skeletons contain scapulas or shoulder blades and the bone structure of their flippers is similar to mammalian forearms. They even have a small vestigial pelvis to which their hind legs were once attached millions of years ago.

Port Phillip Bay is home to a resident population of Burrunan dolphins estimated to number between 80 and 120 individuals. The available evidence from records of cetacean strandings and previous anecdotal observations indicates that the current population is smaller than in the past, reflecting a loss of fisheries habitat in recent decades. 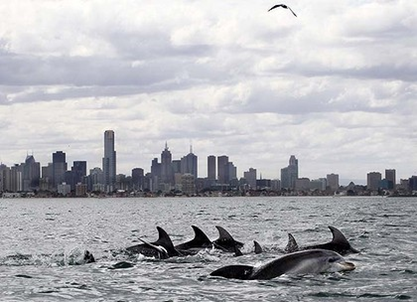 A pod of Burrunan dolphins in Port Phillip Bay, Victoria, with Melbourne in the background.

The dolphins in Port Phillip Bay use their home range for all aspects of their ecology, including their main activities, foraging and feeding, as well as socialising, resting, and the protection and rearing of young. The population of Burranan dolphins in Port Phillip Bay is vulnerable to extinction due to its small size, its restricted home range and the human activities that are likely to be having an adverse impact on the dolphins. These human activities (in order of decreasing threat) are jet skis, boating, swimming and low-flying aircraft (including sight-seeing helicopters).

Research findings from Port Phillip Bay confirm that apart from isolated harassment by jet-skis, the proximity of tour vessels is the key disturbance factor posed by interaction with dolphins. During the tour season, these vessels can spend up to six hours per day interacting with dolphins. Responding to interactions with tour vessels and swimmers may interfere with the dolphins’ daily routine and may impact on their time and energy if interactions constantly interrupt feeding, resting or maternal behaviour. Dolphins normally have only one calf per year, so if the annual birth rate is for any reason lower than the death rate, the future survival of this dolphin species will be perilous.

There is no evidence that the majority of people who swim with the dolphins are doing it for mystical or faith healing reasons. There are just as legitimate reasons for people wanting to closely observe or interact with dolphins, as there are for people to wanting look at animals in zoos. For this reason, dolphin watching and swimming with dolphins are activities that need to be carefully regulated rather than banned completely.

Here is a picture of President Putin of Russia swimming with some presumably heterosexual dolphins in Cuba. 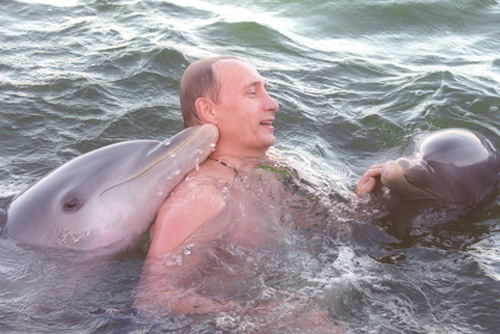 The Australian National Guidelines for Whale and Dolphin Watching have been adopted by the Federal Government and all state and territory governments. These guidelines are a clearly defined set of standards for all human activity around cetaceans, including maximum approach distances for boats and aircraft (except for authorised tour boats). They help people to understand that their actions may disturb these wild animals, and show them how to minimise any effect they may have while whale or dolphin watching. For instance, it is important for only one tour boat at a time to approach a dophin pod, and then side-on rather than from behind, so that the dolphins do not feel corralled (which is how sharks attack them).

State and territory governments are responsible for conservation and protection of whales and dolphins in coastal waters (out to the 3 nautical mile limit). These governments manage most of the human/dolphin interactions, and whale and dolphin watching. They each have their own regulations regarding whale and dolphin watching in coastal waters, based on the Australian National Guidelines. These regulations need not only a high level of compliance, but also strong public support.

Tim Harding has worked as a consultant to the Victorian Department of Environment and Primary Industries (DEPI) assisting in the development of regulations to protect dolphins and other marine mammals. He is a former Director of Flora and Fauna in DEPI, with a background in biological sciences.

Copyright notice: © All rights reserved. Except for personal use or as permitted under the Australian Copyright Act, no part of this website may be reproduced, stored in a retrieval system, communicated or transmitted in any form or by any means without prior written permission. All inquiries should be made to the copyright owner, Tim Harding at tim.harding@yandoo.com, or as attributed on individual blog posts.