Determinism, free will and compatibilism

The idea that the future is already determined is known in philosophy as determinism.  There are various definitions of determinism available; but in this essay, I shall use the Stanford Encyclopedia of Philosophy definition, which is ‘the metaphysical thesis that the facts of the past, in conjunction with the laws of nature, entail every truth about the future’ (McKenna, 2009:1.3).

This thesis presents a difficult problem for the concept of free will: how can we make free choices if all our actions are determined by the facts of the past and the laws of nature?  A related but distinct question is: how can we be held morally responsible for our actions if we have no choices? Undesirable consequences like these are not sufficient reasons for declaring determinism to be false; but they can act (and have influenced many philosophers) as a powerful motivator towards resolving the apparent conflict between determinism and free will.

Some philosophers, such as Peter van Inwagen have gone as far as arguing that the existence of moral responsibility entails the existence of free will (Iredale 2012: 8).[1] There are various other philosophical arguments in favour of free will – one of these is an apparent paradox known as Buridan’s Ass. Some scientists, such as Sam Harris argue in favour of determinism and claim that free will is an illusion. Leading contemporary philosopher John Searle thinks that the issue has still not been resolved, despite two centuries of philosophical and scientific debate.

Most people who are neither philosophers nor scientists seem to intuitively feel that they have free will and so when presented with this dilemma are more likely to choose free will over determinism (Iredale 2012:13).  On the other hand, in my personal experience, scientists who think in terms of causes and effects are more likely to side with a determinist view.  In this essay, I intend to argue that a solution to this dilemma lies not in choosing free will over determinism, nor vice versa; but in the theory that determinism and free will are compatible – known as compatibilism.

Before going on, let us be clear about what we mean by the term free will.  Clarke & Capes (2013:1) have provided a useful definition:

‘To have free will is to have what it takes to act freely. When an agent acts freely—when she exercises her free will—it is up to her whether she does one thing or another on that occasion. A plurality of alternatives is open to her, and she determines which she pursues. When she does, she is an ultimate source or origin of her action’.

So what does it take to act freely?  Taylor (2012: 40) states that there are three essential characteristics to free actions.  One is able to act freely only if:

(1) there is no obstacle that prevents you from doing A, and

(2) there is nothing that constrains or forces you to do A, and

(3) you could have done otherwise. 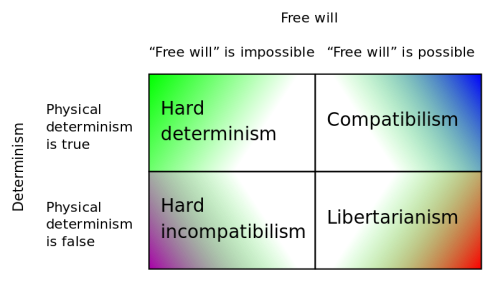 To be more specific, the following set of propositions is described by McKenna (2009:1.5) as the Classical Formulation of the free will problem:

5)      If an event is an act that is causally determined, then the agent of the act could not have acted otherwise than in the way that she did’.

This formulation involves a mutually inconsistent set of propositions, and yet each is consistent with in our contemporary conception of the world, producing an apparent paradox.  How can these inconsistencies be reconciled?  Compatibilists would deny proposition 5).  Incompatibilists, on the other hand, might move in a number of different directions, including the denial of propositions 1), 3) or 4) (McKenna, 2009:1.5).

According to Taylor (1974: 40), all versions of compatibilism (which he calls ‘soft determinism’) have three claims in common:

(i) Determinism is true.

(ii) We are free to perform an action A to the extent there are no obstacles that would prevent us from doing A, and we are not externally constrained (not forced by external causes) to do A.

(iii) The causes of free actions are certain states, events, or conditions within the agent himself, e.g., an agent’s own acts of will or volitions, or decisions, or desires, and so on.

Taylor’s objection to compatibilism is essentially a challenge to Claim (iii); that is, that the certain states, events, or conditions within the agent herself are themselves caused by external factors, consistent with determinism.

My response to Taylor’s objection is that the certain states or conditions within the agent could include the person’s values, ethics, loyalties, priorities, and so on.  Let us call these states or conditions within the agent ‘values’.  These values may have external causes accumulated over the agent’s lifetime.  The important point is that an agent’s values could give rise to more than one possible action by the agent, all of which are consistent with the agent’s values.  Let us call these possible consistent actions ‘options’.  When faced with a decision to make, a rational agent would be likely to consider the options available to her and choose the best option.  In this way, the options available to the agent stem from causes but the agent is making a free choice within the range of options available.

A simple way of modelling this limited version of free will has been referred to by some philosophers as a ‘Garden of Forking Paths’ after the novel of the same name by Jorge Luis Borges (McKenna 2009:2.1; Iredale 2012: 14).  In other words, there are alternative paths an agent could choose to take, but the paths available have been predetermined.  Within this model, the agent meets the criterion of acting of her own free will, because she could have acted otherwise.  Her ability to have acted otherwise is underwritten by her ability to have selected amongst, or chosen between, alternative courses of action (McKenna 2009:2.1).

Daniel Dennett (2003) has proposed a more elegant version of compatibilism with an evolutionary basis.  Although in the strict physical sense our actions might be determined, we can still be free in all the ways that matter, because of the abilities we evolved.  Seen this way, free will is the freedom to make decisions without duress, as opposed to an impossible and unnecessary freedom from causality itself.  To clarify this distinction, he coins the term ‘evitability’ as the opposite of ‘inevitability’, defining it as the ability of an agent to anticipate likely consequences and act to avoid undesirable ones (Dennett 2003:56).  Evitability is entirely compatible with, and actually requires, determinism; because without it, an agent cannot anticipate likely consequences and avoid them.  Dennett provides us with the following explicit argument:

Dennett (2003:58) also argues that there is a concept of chance that is compatible with determinism, which has been invoked to explain evolution via natural selection.  Through these means, he endeavours to unyoke determinism from inevitability (Dennett 2003:60) [2].

In conclusion, I have offered two accounts of how free will may be compatible with determinism – my own and Daniel Dennett’s.  However, I do not claim that either of these accounts has solved the dilemma.  There are also, of course, many other accounts of compatibilism as well as objections to them, plus alternative theories such as hard determinism and metaphysical libertarianism.  Indeed, resolving the dilemma between free will and determinism is very complicated and may be ‘one of the most persistent and heated deadlocks in Western philosophy’ (Nichols and Knobe 2007:1).

[1] Peter van Inwagen’s argument that free will is required for moral judgments  is:

[2] For those who would like to read more on this topic, there is an interesting online debate between Sam Harris and Daniel Dennett.  Dennett critiques Harris’ book on Free Will in a review titled Reflections on Free Will. Then Harris responds to Dennett’s critique in a rejoinder entitled The Marionette’s Lament.

Iredale, Matthew 2012 The Problem of Free Will. Durham, Acumen.

van Inwagen, Peter (2009). The Powers of Rational Beings: Freedom of the Will. Oxford.

Copyright notice: © All rights reserved. Except for personal use or as permitted under the Australian Copyright Act, no part of this website may be reproduced, stored in a retrieval system, communicated or transmitted in any form or by any means without prior written permission. All inquiries should be made to the copyright owner, Tim Harding at tim.harding@yandoo.com, or as attributed on individual blog posts.