Marcus Tullius Cicero (3 January 106 BC – 7 December 43 BC) was a Stoic Roman philosopher, politician, lawyer, orator, political theorist, consul, and constitutionalist. He came from a wealthy municipal family of the Roman equestrian order, and was one of Rome’s greatest orators and prose stylists.

“It is the peculiar characteristic of the [Stoic] wise man that he does nothing which he could regret, nothing against his will, but does everything honorably, consistently, seriously, and rightly, that he anticipates nothing as if it were bound to happen, is shocked by nothing when it does happen under the impression that its happening is unexpected and strange, refers everything to his own judgment, stands by his own decisions. I can conceive nothing which is happier than this. It is an easy conclusion for the Stoics, since they have perceived the final good to be in agreement with nature and living consistently with nature, which is not only the wise man’s proper function, but also in his power. It necessarily follows that the happy life is in the power of the man who has the final good in his power. So the wise man’s life is always happy.” – Cicero, Tusculan Disputations 5.81–2.

Leonard Nimoy on logic and wisdom 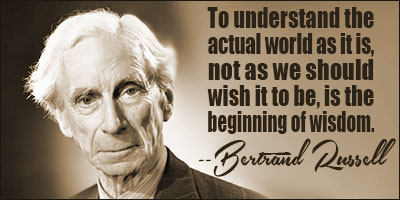 Hitchens on thinking for yourself 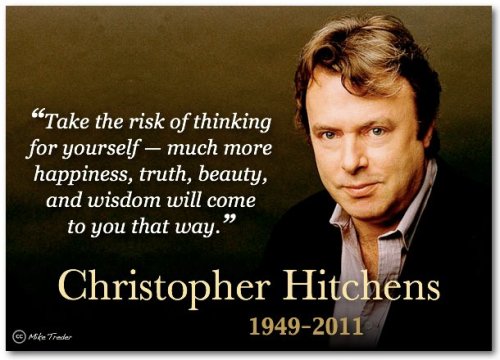 Free your mind – but are there ideas we shouldn’t contemplate?

You’re a free thinker – congratulations – but does that mean you can, and should, approach everything with an open mind? Let me try to convince you you shouldn’t.

I do not want to argue with him: he shows a corrupt mind.

So remarked Elizabeth Anscombe (1919-2001), a giant of 20th century moral philosophy. She was referring to the kind of person who is open to being convinced of something that is intrinsically unjust, such as a court judicially punishing an innocent man.

This seems to be the antithesis of what a moral philosopher ought to do. Her judgement seems to display a dogmatic close-mindedness to the free thinking that philosophy typifies, and an intolerant disposition toward different ideas. To dismiss the reflective, well-considered thinking of another person – even if it leads to uncomfortable conclusions – is the stuff of ideology, not philosophy.

Or so it seems.

Philosophy is, as any undergraduate student has been told, a love of wisdom and a quest for truth. Philosophers are good at recognising the complexity of truth, and accepting that there is merit in a wide range of different positions. They are also good at explaining why common assumptions are oftentimes problematic, and are therefore masters of qualifying terms:

I agree, but; Yes, insofar as; I think that’s true, on the condition that …

Philosophy begins, as Aristotle remarked, with curiosity and wonder.

Socrates, the pedagogical role model of Western philosophy, saw himself as a gadfly whose constant questioning of unreflective beliefs stung the vacuous horse of the Athenian political system.

Immanuel Kant similarly described the work of David Hume as having awakened him from his “dogmatic slumber”. Once awakened, a mind is hungry for and open to a close and authentic engagement with the truth – this hunger, like the taste for Pringles, is hard to stop once it has begun.

Is everything open to questioning? Are certain things so patently unethical that even being open to believing in them if one hears a persuasive enough argument is demonstrative of a deficient character?

Everyone believes, to borrow an example from Quentin Tarantino’s revenge film, Kill Bill, that sexually abusing a person who had fallen into a coma from which she is not expected to wake is wrong.

What, however, are we to think of the person who argues that “at the moment I think that those practices are immoral, but I’m open to being convinced otherwise”? Is this a virtuous commitment to truth – or a cold and de-personalised detachment from morality?

Reasonable disagreement on complex issues such as commercial surrogacy, the extent of the right to privacy, or same-sex marriage isn’t demonstrative of anything other than the importance of the goods at stake and the wonderful capacity of human beings to form their own opinion.

In such cases tolerance, open-mindedness and respectful debate are virtues of utmost importance. But as Patrick Stokes has argued already in this series, just because we haven’t settled every moral question doesn’t mean that truth is completely subjective. Just because people disagree on some matters doesn’t mean that they do, or even should, disagree on all of them.

One of the mistakes people often make about moral philosophy is that once one becomes a philosopher, one must discover the truth by themselves. Melbourne philosopher Raimond Gaita describes the consensus view of the true philosopher as being so strongly committed to truth that he or she should “follow the argument wherever it leads”.

Gaita is rightly critical of this position but nevertheless the belief prevails: to shirk hard truths is not becoming of a philosopher. It betrays truth, cowing to popular opinion and a deference to assumption that undermines the very practice of philosophy.

Except that philosophy is itself a moral activity.

Philosophy isn’t (primarily) a profession, nor is it a tool of argument. Philosophy is a way of living and being in the world, and the philosopher is, like every other person, shaping him or herself through reflection, questioning, and analysis.

Should I ever allow myself to become a person who believes that the rape of a comatose person, or any other person, is justified, or – to cite a recent controversy – that “after-birth abortion” (also known as infanticide) might be a justifiable practice?

Of this thinking, Gaita remarks that, “were my commitment to philosophy to tempt to me such nihilism, I would give up philosophy, fearful of what I was becoming.”

I think Gaita is right, but it is important here to distinguish between discussion of a belief and the belief itself. In a Western society, no discussion should be taboo.

The Festival of Dangerous Ideas (FODI) faced a host of criticism for arranging a talk entitled “Honour Killings are Morally Justified”. I think it would be wrong to host such a talk with the hope or belief that people might be persuaded of its truth – but I don’t think hosting a talk on honour killings, with the intention of understanding how the practice is justified by some, of hearing why it takes place, could ever be condemned as immoral.

As I argued at the time, FODI organisers were wrong to title the talk as they did, but they weren’t wrong to want such a talk to occur.

We can discuss which beliefs are ones which it is simply wrong to be open to persuasion regarding; in some ways, that might be a matter of private determination, but we ought to agree that such things exist.

“No man wishes to possess the whole world,” Aristotle wrote, “if he must first become somebody else.”

Part of what defines a person, a society, and humanity, must be what we refuse, absolutely, to allow ourselves to become – not only as actors, but as thinkers too.

This is part of a series on public morality in 21st century Australia. We’ll be publishing regular articles on morality on The Conversation in the coming weeks.

Matthew Beard does not work for, consult to, own shares in or receive funding from any company or organisation that would benefit from this article, and has no relevant affiliations.

This article was originally published on The Conversation. (Republished with permission). Read the original article.