Religious sanctions and contempt of court

This appears to be an interesting case on the relationship between religion and the law.

The recent decision of the NSW Court of Appeal in Ulman v Live Group Pty Ltd [2018] NSWCA 338 (20 December 2018) raises important issues about the interaction between internal disputes within a religious community, and the “secular” court system. In this case a majority held that the threat of purely religious sanctions, to be applied if a dispute was resolved in the ordinary courts rather than in a religious tribunal, amounted to contempt of court, and imposed financial penalties on members of the tribunal. Significant questions are raised as to whether religious groups are able to apply their own religious beliefs in disciplining members of their community, or whether these decisions will be over-ridden by the ordinary court system.

The Bletchley Girls, by Tessa Dunlop

It’s not possible to read a book like this without being a little awestruck at what ordinary people endured in Britain during WW2.   This remarkable history of the unsung women of Bletchley is an eye-opener into working conditions that none of us would tolerate today…

Bletchley Park, immortalised in films such as The Imitation Game and the TV series The Bletchley Circle, was the centre of intelligence gathering in Britain.  As the war progressed, Bletchley grew from modest beginnings in 1938 to employing thousands of people engaged in the complex work of decoding enemy transmissions, and was the birthplace of modern computing.  Today the site is a heritage tourist attraction but during the war it was top secret and the people who worked there were all bound by the Official Secrets Act.

For the young women recruited into the service—from the ATS, the WRENS, the WAAF and civilian life—their work was…

Ah, the benefits of adulthood and hindsight! At the authoritarian private school I attended (and hated) I was forced to study the Latin language. Nobody ever gave me a reason for studying it. As far as I knew, Latin was a dead language, so I couldn’t see any point in it. So I basically switched off and daydreamed in class, as I suspect that many pupils do in science or maths classes.

From memory, I was required to attend Latin classes for 3 years, getting lower and lower marks until I achieved 4% for Latin in Year 10 for writing my name on the exam paper. This surprised the Headmaster, because I usually got high marks in other subjects and even came top of the class in a few. The Headmaster (whom I also disliked) presciently wrote on my school report ‘It appears that Timothy is not suited towards a career in the Classics’.

When got to university and studied biology for the first time (it was not taught at my expensive private school), I discovered that species had Latin names. I also found out that a lot of scientific terms have Latin or Greek roots, and that if you knew these roots you could figure out the meaning of scientific terms, like ‘telescope’ and ‘micrometer’. If anybody had told me these things at school, I would have been motivated to learn Latin, and I probably would have enjoyed it.

Later in life, I travelled to France, Italy and Spain, studying these languages prior to each visit. I found that if I had known the Latin roots, learning these Romance languages would have been easier. And still later, while doing an Arts degree, I studied Ancient Greek and Roman history, plus Classical Greek philosophy and Linguistics, which I found very interesting. I could possibly have even had a career in the Classics if my silly school teachers had given me one good reason for learning Latin.

Vindicating science by bringing it down, part II

As we have seen in part I, scientists and early philosophers of science adopted an idealized conception of science, which focuses on the successful end result of scientific activity, and in which there is no place for any influence of the social, or indeed, for any of the actors involved in the scientific endeavor. All of that is swept under the carpet. But the fact that the eventual goal of science is to eliminate the social does not imply that social factors have no important role to play in the process. Science, after all, is nothing but the concerted effort of (sometimes not to) humble human brains, none of which was designed to unravel the mysteries of the world on its own.

In the past couple of decades, science has been brought down to earth again by sociologists, cognitive scientists, evolutionary psychologists, and historians. Unfortunately, the opposition between the…

Vindicating science by bringing it down, part I

What is the role of the social in science? If one consults science textbooks, one will find that the social dimension of scientific knowledge is conspicuously absent. Science is supposed to reflect the way the world really is, independent of our petty human lives. It is, in the classical view, the epitome of a rational endeavor, free from social influences. Of course, science is carried out by human beings, but their individual backgrounds and social lives are simply taken to be irrelevant. What matters are the intellectual merits of a theory, not who conceived it. What matters is the evidence, not who gathered it. This stark contrast between the social and the rational can be found in philosophical accounts of science as well. Because social factors are rendered invisible in the end products of science, many philosophers have underestimated their constructive role in the acquisition of scientific knowledge.

Here’s a corker, but what would you expect in a soupy climate of Intersectionality? It was inevitable that someone would eventually see Nazis as a marginalized and oppressed group, and rush to their defense. And so, as this BuzzFeed story reports, a residence counselor at the Very Woke School of the University of Massachusetts at Amherst went to bat for Hitler (click on screenshot).

Third-year student Nicole Parsons, fed up with hate crimes occurring on her campus, put up this sign in her dormitory window: And the inevitable result in a school like that:

Parsons, a junior at the University of Massachusetts, Amherst, told BuzzFeed News on Sunday that she decided to put up the sign after a swastika was drawn over a “Happy Hanukkah” sign on a resident assistant’s door the first week of December.

“I thought maybe if I hang the sign up, maybe the person who drew…

Why Alex Rosenberg is wrong just about everything

Philosophy is my second academic career. My first one was in science, evolutionary biology, to be specific. Depending on how you look at it, this makes me either unusually competent in two normally widely distinct areas of academic scholarship, or barely making the passing grade in both. Be that as it may, I have made a personal hobby to observe my new profession from the outside, as much as it is possible, sort of like an anthropologist looking into a different yet sufficient familiar culture.

One of the things I’ve noticed is that philosophers are unusually critical of their own field, with a number of prominent ones, both now and historically, actually arguing that it should be dismantled, usually in favor of science (or linguistics). I will not get into that debate here, as I’ve covered in detail before.

Another frequent observation is that of a high frequency of…

How to stop a conversation: with facts and definitions

I really ought to know better, after decades of activism on behalf of science and critical thinking, than to engage in ideologically loaded discussions with friends or family. Indeed, the opening chapter of the second edition of my Nonsense on Stilts: How to Tell Science from Bunk features two rather frustrating conversations I’ve had with a relative (I call him “Ostinato,” Italian for stubborn) and an acquaintance (“Curiosa,” Italian for curious). Neither episode led to either side moving a fraction of an inch away from their initial position, resulting mostly in aggravation and emotional distress on both sides. Still, as I explain in the book, it wasn’t time entirely wasted, since I came to a couple of important realizations while engaging in such discussions.

For instance, from Ostinato I learned that a common problem in these cases is the confusion between probability and possibility. Whenever I would explain why I…

Did Trump go off his meds?

Something is amiss here; look at this series of tweets from the “President”, all issued within two hours.

And no, he’s not going to get his Wall for Christmas. He’s been a bad boy this year, and will get a big lump of coal to fuel his dirty energy initiative. 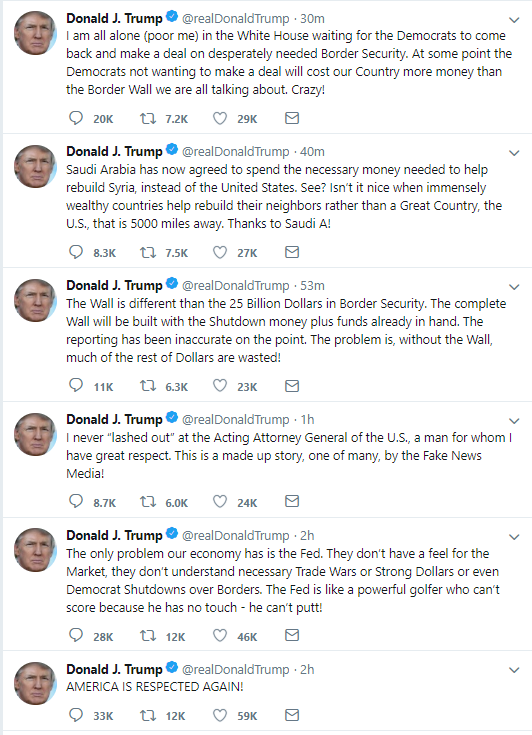