Did Descartes think that animals have feelings?

It is a common misconception that Descartes held the view that because animals cannot think, they have no feelings and do not suffer pain.  In 1952, this view was described by the Scottish philosopher and psychologist Norman Kemp Smith as a ‘monstrous thesis’ (Cottingham 1978: 554-556).  In this essay, I intend to examine two questions – firstly, whether Descartes actually held this view and secondly, whether this view is entailed by his other views about animal minds.  My answer is essentially that whilst the text references are somewhat unclear on this specific point, it is unlikely that Descartes held this view or that it was entailed by his other related views.

Part of the problem in discussing these questions is a lack of clarity amongst Descartes’ objectors (and even Descartes himself) in the meanings of key terms such as ‘consciousness’, ‘self-consciousness’, ‘thought’, ‘awareness’, ‘feelings’ and ‘sensations’.  In an attempt to clarify the issues, Cottingham (1978: 551) helpfully suggests that the views attributed to Descartes be broken down in to a number of distinct propositions:

(4)  Animals have no language.

(5)  Animals have no self-consciousness.

(6)  Animals have no consciousness.

(7)  Animals are totally without feeling.

Proposition (1) is not asserted by Descartes in this explicit form; but Cottingham (1978: 552) argues that this is what Descartes means in Part V of his Discourse on Method, where he says that the body may be regarded ‘like a machine..’.  It is important to note that for Descartes, the human body is a machine in the same sense as an animal body.  This view is part of Descartes’ general scientific ‘mechanism’ where all animal behaviour is explainable in terms of physiological laws (Cottingham 1978: 552).

The definition of ‘automaton’ in Proposition (2) is significant, as it has led to some confusion in the descriptions of Descartes’ views.  Cottingham (1978: 553) argues that the primary Webster dictionary definition of ‘automaton’ is ‘a machine that is relatively self-operating’ (which is the Ancient Greek meaning of the ‘auto’ prefix).  It does not entail the absence or incapability of feeling, as some of Descartes’ critics have alleged (Cottingham 1978: 553).  What Descartes is saying is that the complex sequence of movements of machines, such as the moving statues found at the time in some of the royal fountains, could all be explained in terms of internal mechanisms such as cogs, levers and the like.  Descartes’ point here is that the mere complexity of animal movements is no more a bar to explanation of their behaviour than is the case with the movements of these fountain statues (Cottingham 1978: 553).

Regarding Proposition (3), a crucial and central difference between animals and human beings for Descartes is that animals do not think.  In a letter to the English philosopher Henry More dated 5 February 1649, Descartes says that ‘there is no prejudice to which we are all more accustomed from our earliest years than the belief that the dumb animals think’.  He also says that they do not have a mind; they lack reason; and they do not have a rational soul (Cottingham 1978: 554).  Descartes defined ‘thought’ in his Second Replies to the Meditations as follows: ‘Thought is a word that covers everything that exists in us in such a way that we are immediately conscious of it. Thus all the operations of will, intellect, imagination, and of the senses are thoughts’ (Radner and Radner, 1989: 22).  Descartes’ inclusion of the senses in this definition is ambiguous, as I will discuss later.

For Descartes, Proposition (3) is entailed by Proposition (4) claiming the absence of language in animals.  In a letter to the Marquess of Newcastle dated 23 November 1646, Descartes makes the point that the utterances of animals are never what the modern linguist Chomsky calls ‘stimulus free’ – they are always geared to and elicited by external factors (Cottingham 1978: 555; Radner and Radner, 1989: 41).  Descartes explains in his letter that the words of parrots do not count as language because they are not ‘relevant’ to the particular situation.  By contrast, even the ravings of insane persons are ‘relevant to particular topics’ though they do not ‘follow reason’ (Radner and Radner, 1989: 45).  This brings us to what is known as Descartes’ ‘language test’ – the ability to put words together in different ways that are appropriate to a wide variety of situations (Radner and Radner, 1989: 41).

In an attempt to overcome certain objections and counter examples, Descartes later modifies his language test to claim that animals never communicate anything pertaining to ‘pure thought’, which he means unaccompanied by any corporeal process or functions of the body (Radner and Radner, 1989: 48).  This modification is what is known as Descartes’ ‘action test’, which has been stated by Radner and Radner (1989: 50) as:

With respect to Proposition (7), Cottingham (1978: 556-557) argues that Descartes did not commit himself to the view that animals do not have feelings or sensations.  He quotes from Descartes 1649 letter to More, where he says that the sounds made by livestock and companion animals are not genuine language , but are ways of ‘communicating to us…their natural impulses of anger, fear, hunger and so on’.  In the same letter, Descartes writes: ‘I should like to stress that I am talking of thought, not of…sensation; for …I deny sensation to no animal, in so far as it depends on a bodily organ.  Cottingham also quotes from Descartes 1646 letter to Newcastle, where he wrote: ‘If you teach a magpie to say good-day to its mistress when it sees her coming, all you can possibly have done is to make the emitting of this word the expression of one of its feelings.’  In other words, Descartes denies in these letters that animals think, but not that they feel (Cottingham 1978: 557).

Notwithstanding the apparent vindication of Descartes in the text of these letters, Cottingham (1978: 557) next argues that Proposition (7) is consistent with Descartes dualism.  Since an animal has no mind or soul, it follows that that it must belong wholly in the extended divisible world of corporeal substances.  Cottingham (1978: 557) thinks that this must be the authentic Cartesian position, presumably because the central importance of dualism to Cartesian metaphysics.  On the other hand, I would argue that a lack of Cartesian thought does not entail a lack of feeling or sensation, as I discuss under Proposition (3) below.

The next question to consider is whether any of Propositions (1) to (6) are true; and if so, whether Proposition (7) is entailed by any of these earlier propositions that are true.

Proposition (3) is probably the area of greatest contention.  Radner and Radner (1989: 13) cite empirical evidence as far back as Aristotle indicating at least the possibility of thought by animals.  Aristotle cites the nest-building behaviour of swallows, where they mix mud and chaff.  If they run short of mud, they douse themselves with water and roll in the dust.  He also reports that a mother nightingale has been observed to give singing lessons to her young (Radner and Radner, 1989: 13).  More recently, there is a video on YouTube of a mother Labrador teaching her puppy how to go down stairs.[1]  There is another video of a crow solving a complex puzzle that most human children would have difficulty with.[2] Whilst nest building and singing teaching are arguably instinctive bird behaviours, dogs teaching puppies about stairs and crows solving complex puzzles are less likely to be instinctive.  They indicate the possibility of animals planning things in their minds.

Cottingham argues that even if Proposition (3) is true, it does not follow that Descartes is committed to a position that animals do not have feelings.  This is because Descartes separates feelings and sensations from thinking – for example a level of feeling or sensation that fall short of reflective awareness (Cottingham 1978: 555-556).  Radner and Radner suggest that the word ‘sensation’ is ambiguous for Descartes.  On the one hand, it could refer to the corporeal process of the transmission of nerve impulses to the brain; yet on the other hand it can also refer to the mental awareness that is associated with the corporeal process (Radner and Radner 1989: 22).

Another area of contention is in relation to Proposition (4).  Gassendi objected that Descartes was being unfair to animals in judging ‘language’ in only human terms.  He suggested that animals could have languages of their own that we do not understand (Radner and Radner 1989: 45).  I would add that human sign language illustrates that language need not be exclusively vocal.  Radner and Radner suggest that the natural cries and gestures of animals can be appropriate to the situation and can communicate useful information to other animals.  For example, a Thomson’s gazelle, seeing a predator lurking in the distance, assumes an alert posture and gives a short snort.  The other gazelles within hearing distance immediately stop grazing and look in the same direction.  The message is not just ‘I’m scared’ but it conveys a warning to look up and over in this direction (Radner and Radner 1989: 45). 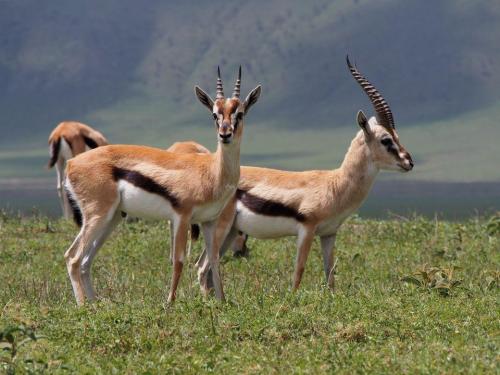 Radner and Radner (1989: 102-103) argue that neither the language test nor the action test lead to the conclusion that animals lack consciousness.  Either animals pass the language test or it is not a test of thought in the Cartesian sense.  The Radners argue that even if we were to grant that action test shows that animals fail to act through reason it still does not establish that they lack all modes of Cartesian thought (Radner and Radner 1989: 103).  I would also argue that Descartes modification of the language test to an ‘action test’ results in a proposition similar to Proposition (3) about thinking which I have already discussed.